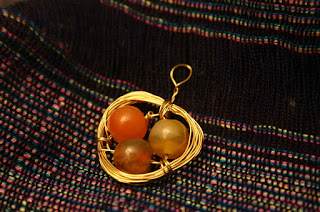 I like this one. Couldn't you see it on an organza ribbon around someone's neck?

I'm enjoying playing with these materials. Can you tell?

So . . . would you like to see this under the tree? Can I spring it (with ribbon) on those infamous unsuspecting female relatives?

the rhythm of the week

As we push our rock up the hill every day this year, it's been hard to hold onto the wonderful rhythm of the church year. Feed the babies, fall back asleep, feed the babies, fall back asleep, feed the babies, don't go back to sleep . . . try to love the children, take care of the children, make eye contact with all the children (hard when there are four sets of eyes to look into, and you have only one set yourself), answer all the questions, while making sure that those babies still get fed, and loved, and changed, and snuggled . . . and make sure to love and snuggle the older ones too . . . and teach, admonish, and love some more . . . it's not a bad life, in fact, it's better than I ever thought it could be, but it's like body-surfing: all you feel is the wave, with the water filling your eyes, nose and mouth, you have no sense of the larger ocean the tide is pulsing through.

But I think, in the midst of this, I'm getting the feel for an older rhythm, for the rhythm of the week. It's the same day, over and over, it feels, but then there's Sunday, and Sunday lifts us up.

It's a pause, a breath. Not that every Sunday is a sinecure. Last Sunday was awful. But even that bad break in the everyday routine led to new insight about what we were doing wrong in our day-to-day life, and this whole week has been better because of the fight we had Sunday.

(My husband and I have good fights, I think. We can always feel them coming, building like that sullenness in the air before a thunderstorm, and they're never fun, but we're always so much easier with each other afterwards, having said all we needed to say, and having come to a better place for the storm. It's always like a clear, rainswept day after a good fight.)

But there being Sunday changes everything. We stop doing what we do every day and remember why we do what we do every day. I can feed those babies . . . because Jesus feeds me. I can sleep . . . and I wake again, because the Lord sustains me. I can meet my childrens' gaze . . . because the Lord sees me. I have these blessings . . . at the Lord's hand. Tomorrow is still coming . . . but the Lord will be Lord tomorrow also.


God instituted the seven day week in Creation itself. It changed forever, became itself, when Christ rose Sunday morning. So every week begins with hope, and every day's work is done in a universe filled with order, filled also with creative beauty.

Finally! I finished my two year old son's Christmas blanket, from the pattern he picked out; the first completely completed Christmas project of the year. 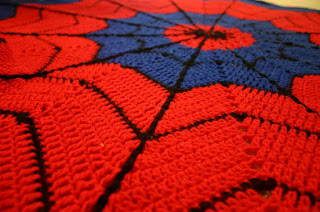 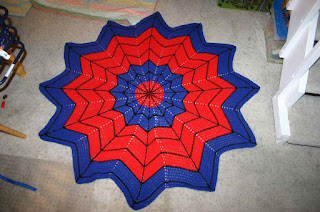 The trying thing about this pattern is that every round is longer than the last, so a pattern that initally feels like it's working up quickly starts to draaaaaaaaag. (It's over five feet from point to point.) But it's incredibly satisfying to see it all done.

And I think it'll be doubly satisfying to see Gamgee in his bed, all snuggled up under it this winter.

And I finally have something to post to Ranee's Finished Object Friday! :)

p.s. The pattern can be found here.
Posted by Jessica Snell at 8:15 PM 1 comment: 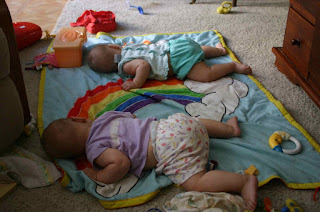 If you hadn't guessed from my lack of posts, this twinfancy thing is kicking my butt. I've decided to call this period of my life "Santification Bootcamp" because that sounds better than "In Which Jessica Gets Not One Minute To Call Her Own And Hopes That By Submitting To It All She'll Become More Like Christ, That Is, Sometimes, When She Actually Remembers That She's Supposed To Be Becoming Like Christ."

I remember a passage in Lewis (probably from Screwtape) in which he points out that if our Lord were actually physically present with us all day, telling us to do our daily duties, we would do it with alacrity, and if he gave us just one half hour at the end of the day and told us "do what you like with it", then we would be jaw-droppingly grateful for his generosity.

The trick is doing our daily duty with such joy and attentiveness even when we cannot see him. I am so working on this. Because He is still here.

So, in the meantime, here are a few links (mostly read while nursing the twins) that have got me thinking this week:

From Amy's Humble Musings, a post on Getting Real.

And from that weightiness, I give you something mostly amusing: A Dress A Day on Why Skirts Are Better Than Pants.

And this post, from Anthony Esolen, asking "Where Have All the B Movies Gone?" has me thinking about my favorite version of the B Movie, the Regency romance. I love that genre, and it is so very much a genre, with rules, with predictability, with the hero, the heroine, the villian, the happy ending. But there is something good about hearing the same story told over and over again in different clothes. It's not high art, but it's worthy nonetheless, I think. I want to publish a few myself, someday.

So, dear readers, what's your version of the B Movie? What's the medium in which you could hear the same old story told a hundred times? Pop romance ballads? Paperback Westerns? Pulp radio dramas?

May your day be filled with God's grace.

p.s. I hope it goes without saying, but when I mention my beloved Regencies, I'm talking about those in the classic Georgette Heyer style, and not the more recent p/rn-in-Jane-Austen-costumes style.

p.p.s. No, I didn't put the babies down on their tummies for a nap. They rolled over into those positions all by themselves. :)
Posted by Jessica Snell at 9:40 AM 5 comments: